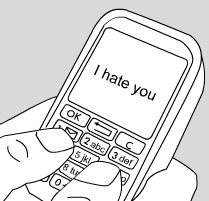 A new study in the latest print edition of the Journal of Pediatrics finds text messaging has become an increasing venue for cyber bullying.

The study, which included 1,588 young people aged 10 to 15 who answered questions online in 2006, 2007, and 2008 as part of the Growing Up with Media survey,  found that while rates of violent exposures and experiences online have leveled off, more kids are being harassed or bullied via text message.

“It may be because aggressive behavior is shifting from online to text messaging or it may be because text messaging is relatively new and we’re all figuring out how to communicate well using it; in this case, rates should stabilize as we become more familiar with it,” says study researcher Michele Ybarra MPH, PhD, of Internet Solutions for Kids, Inc. in San Clemente, Calif.

Parents can also use filtering software to prevent children from accessing inappropriate web sites, but no such technology is available for cell phone texting yet, she said.